The children in Room 1 at St. Anthony's have been interested in our tea lights that were introduced during a provocation with magna tiles. Several children inquired about how else we could use the lights and suggested pairing them with colored cups and colored paddles. Conversation took place during ​their investigation:

"My light changes color when I put it in the cup."-Kelvin

"When the light is under the blue paddle it's blue. Under the red it's red. Together it's purple."-John

"The yellow and blue make green."-Yayleen

"When I look through them everything is that color."-Jacob

"The light is making it bright."-Ximena

The children in Room 1 at St. Anthony's are still investigating the topic of soccer. The children collaborated together to create a piece of artwork to display in the classroom. Motion and speed were used to spread paint across the canvas. As the children worked they noticed that communication was key in this activity!

"I need to tell my friend when I'm going to pass the ball to them so they can stop it. If I don't, paint will go everywhere!"-Rosselyn

"When I kick the ball, it moves the paint across the paper."-Marvin

"The colors are mixing up."-Brandon

The children in Room 1 at St. Anthony's have been busy investigating and exploring the topic of soccer. Different provocations from observational drawings, to measuring distance of kicking a soccer ball, to creating our own jerseys and team names have helped us to answer questions and inquiries about the sport. The children especially enjoyed taking a field trip to meet a "soccer expert", Mrs. Sarah's son, Owen. The children asked many questions such as; "How did you learn to play soccer?", "What position do you play?", "How often do you practice?", and "How do you feel when you lose?". They then had the opportunity to go outside and put what they learned into action by playing a game of soccer and working on their own foot skills, passing/maneuvering the ball, and communicating as a team. We are very excited to see where our wonders lead us next!

It's Fall Time! (Leaves and Tree)

The children in Pre-K 1 have been fascinated with what the seasonal changes of Fall have done to the trees on our playground. We went outside and sat under the tree to create observational drawings of what we saw when we looked up into the tree. The following day we took our curiosities further and created our own versions of trees on the light table using sticks and gems. Some children even took the gems and used them as measuring agents to measure each stick.

The children in Pre-K 1​ were able to create paintings with paint that had different spices(cinnamon, nutmeg, and vanilla) added to them. They made different observations on the scents and discussion took place as they painted.

The children were able to investigate an experiment with heat. They used a blow dryer and crayons glued to a pumpkin and hypothesized what would happen when the heat touched the crayons. A couple theories were:

"I think the crayons will dry."-Kelvin

"The crayons will melt and it will turn into a rainbow of colors."-Yayleen

After the experiment, the children were able to do observational drawings of their finished pumpkin.

With the wet, rainy weather this week the children went outside and sat under an awning and observed the rain. They were able to make drawings of what they saw and discussion took place as they were drawing:

"The rain is hitting the puddles."-Marvin

"It smells weird outside when it rains."-Ximena

"The cars make it splash on the road."-Kelvin

The children in Pre-K 1 did an experiment with vegetable oil and colored water. They wondered what would happen when we combined the two and theories were as followed:

It will turn it into water of colors.-Rosselyn

It's gonna be a rainbow.-Jacob

The children were given sweet peppers for lunch and it sparked in interest in different kinds of peppers. For a provocation using bell peppers the children investigated through drawings, cutting them in half to examine the inside and viewing them through magnify glasses. Rosselyn made an observation of a pepper after she cut it..."these smell spicy!" 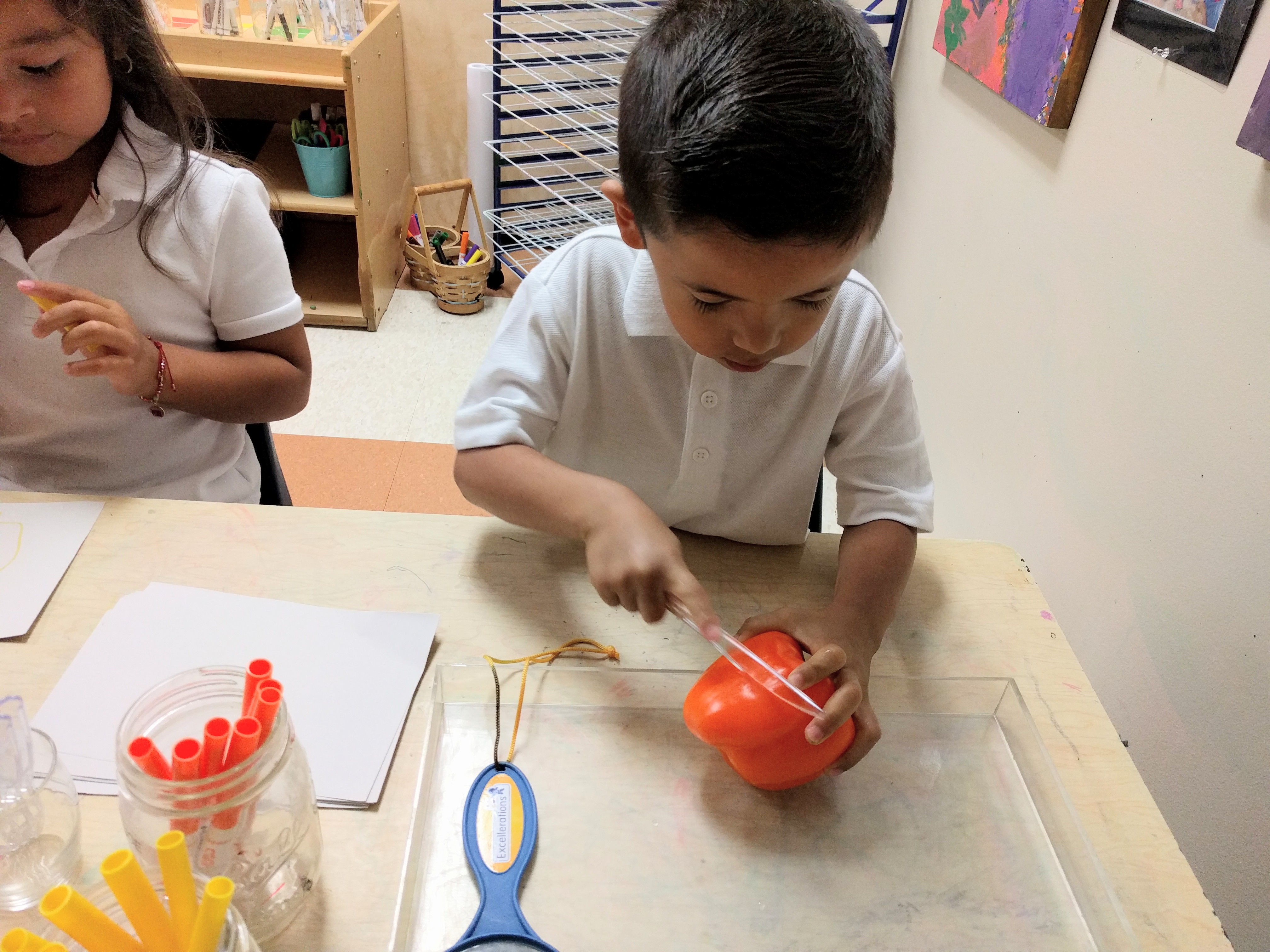 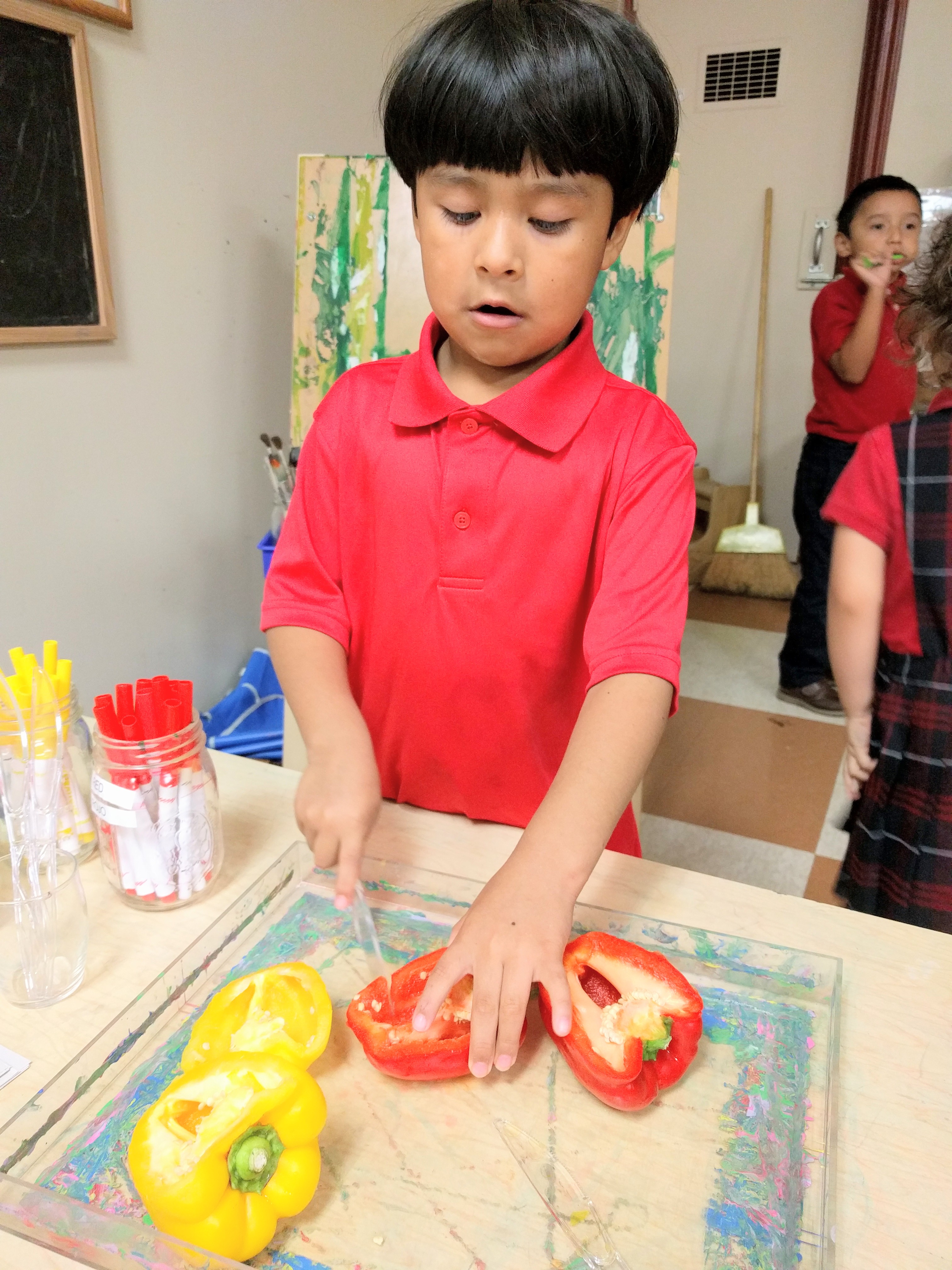